A quarter around the world

Posted on December 21, 2014 by Estelle Dalmayrac

The December 14, We celebrated our first quarter passed through the world, or one quarter of our trip! (already!)
Hey, we must also say that we leave just returned from 3 weeks of holidays in Istanbul and Bangkok. The figures will be quite different from the last few months.

Our numbers of the month!

In total, to December 14, it had travelled 3672 kms from the beginning. Either 511 kms for this 3rd month in 8 days on the saddle. OK, it was small players this month!
We travelled along in Greece and Turkey, the streets (mostly walking) andIstanbul and Bangkok.

Say you right away that we has not much out the tent during the 3rd month. No, we do even released it as... 2 times! Otherwise, we have always stayed warm, Warmshowers and couch, or people who have hosted us (and more a night in a hostel in Istanbul and a night... on the plane!) 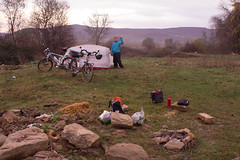 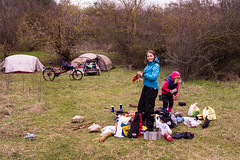 With all that, we were wise and we lost too much of things.
-Thomas lost her short linen: no idea where he has gone, big mystery. When he saw the cold on Turkish roads, he must have felt neglected and fled!
-A wooden spatula : left with Pol, our host of Alexandroupoli. The second is lost!
-One tensioner : at Ipsala, probably fell from the bike during one of the many neighborhood tour guests have done with our frames. It's our fault, it would be best to attach it.
But don't worry, we have lots of lots of lost things, with the passage of the Dalton parents in Istanbul! OWL, plenty to sow on the road!

First flat tire ! Have you seen the perpetrator of the crime in the video of the Greece ?
We took advantage of our vacation to change my brakes (those of Thomas are still good: there is evidence it has less fear in the descents!), a few cables and other routine interviews. After 3672 kms, they deserved well it!

What we liked least

For we see or meet again, on the road...