A week in the bustling Bangkok

Posted on December 19, 2014 by Estelle Dalmayrac

It lives, it moves, it is surprising and exotic! A good starting point with Asia!

From 6 to 14 December, we were welcomed in the superb old thai style room, owned by Supaporn, Supawan School Director, West of the city. We were so although we did a bit of rab. This was a perfect place to acclimatize to the country.

A little good-wife of 68 years, very active, smiling, talkative, short super cool. She is recovering from the installation of a cardiac stent, but already provides travel in the Japan and Europe on its folding bike Brompton. She spent much time with us for we present her school and help us organize animations for his students. She gets a lot of cyclists through the warmshower network (including 30% of french she said!). She loves its guests to share their culture with the students to open to the world.

Our activities at the school

We spent two large half days at school. The first to follow the normal course of the life of the school; "and a 2nd for activities: we learned a few verses from"Petit papa Noël"for students of 9-10 years; then dancing the breeze-foot (Aveyron dance) small of 1st and 2nd year of kindergarten. Too cute! It was really great moments! It offers more info (and pictures!) in the specific page quickly.

The first day, good introduction: tour in morning with Supaporn bike and his friend Chang, to the floating market in the corner for a breakfast thai. We discover the local flavors with great pleasure! We test a little spice: it goes rather well if it "diluted" with rice (but station in fifths of cough if we try to take the spicy sauce alone!)
Throughout the week, loved eating in small restaurants on the sidewalk: soup with pasta, fried rice and its vegetables, omelettes Thai, there is a choice! We even tried fruit juice iced with real fruit mixed before our eyes or the delicious iced coffee! Great for freshening up! Throughout the Kingdom, the ice cubes are made factory with treated water. After some fears, it was realized that it was no concern for our stomachs of Europeans!

A bit of culture!

Discover Bangkok was also discover culture thai, by its temples, its royal palace...
The royal palace
It is superb, magnificent decorations everywhere, color. But it was afraid initially seeing the mass of tourists. Finally, we saved the shot by making the free walk tour of the Palace. A guide awesome, that makes us a "one man show" while telling full of small anecdotes on the palate, the Royal family and traditions thai.

Museum of the Queen clothing
Within the walls of the Palace: ok, see the clothes of the Queen and the pictures of the ceremonies for which she has worn, it's funny, but hey, it's not what fascinated Thomas. On the other hand, there is a whole section on the manufacture of silk, then weaving demonstration: super interesting! And as this museum is a bit eccentric, he was no great world!

Temples:
We visited the most famous:
-Wat Arun, the Riverfront
-Wat Pho, the giant reclining Buddha temple.
It was beautiful, and you really feel in Thailand when it is in!

Thai massage
Thai culture also passes by massages, then too hard, we had to try! We were there from the first day: not bad for recovering from the night in the aircraft. Good, Thai massages, not what there are sweeter, makes cracking joints, ca a little hurt, but it is effective!

And full of Farang places

The Farangs, is like the Yovo in Benin, the Jeditone in the West, or the Zoreilles at the meeting. In short, when means "farang", you know that it speaks to us, "white".
Bangkok is a city that has a lot of expatriates and European tourists. So often, there are entire neighborhoods with an impressive concentration of whites.
Lumpini Park
Super Park to rest in the shade when the sun beats strong. We spent a good time to look at its fauna: large lizards, turtles and squirrels!

Siam Center district
District shopping malls all over Giants than the others. It even made a bar outdoor on the 56 th floor of a Tower: the point of view is worth a visit!

Nana district
A few nice bars. And then a few streets more far, from bars to "young women in very short skirts". The funny thing is that the parallel Street to the West, it is the Arab neighborhood with quite a lot of bearded and women in niquabs!

-Bus: Not easy to find the judgment, know what bus to take, it has no precise plan! Fortunately, we had in the House of the indications written by other warmshowers! It is always shielded from world, and the air is doors and windows open!
– le bateau : handy see inevitable to pass from one side of town to the other, or descend quickly to the South of the city (metro Sathon for example)
– le métro : hyper-modern and very clean. air-conditioned, even a bit too much, the temperature difference is rude! A little expensive also because it is necessary to take tickets depending on where it goes and it rises quickly (and there are 2 different subway companies in the city). The Skytrain is superb! There are magnificent views of the buildings and the large avenues embouchonnnees.
– le Tuktuk : kind of mini moto-taxi van. It's funny, ca crank in every sense, this is for fun (but not very profitable in the end)!
– les taxis : has taken it only once, but if he puts well counter and there is not too many plugs, it is hyper-profitable! 3 euros to 25 minutes by taxi at midnight, it is cool, no?
– À pied quite simply: we loved walked through the streets of the city, feel the rhythm of life, the smells of the dishes prepared on the sidewalks... 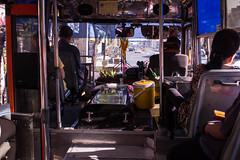 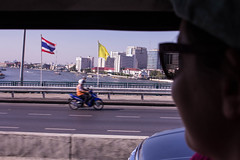 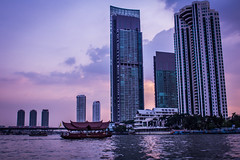 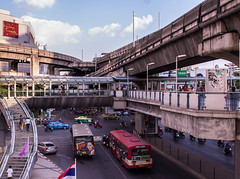 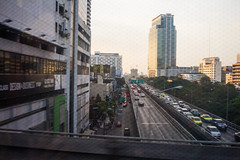 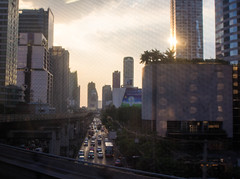 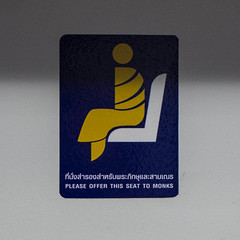 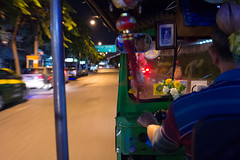 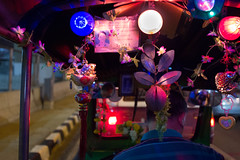 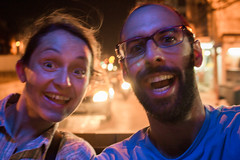 A few anecdotes and more...

– Les gens en Asie sont vraiment plus petits… Du haut de ses 1,90m, Thomas dépasse un peu tout : les rayons de supermarchés, c’est le plus marquant, il dépasse le haut des rayon de bien 50 cm !
-Buddhism is part of the daily life of Thais. We see small altars for Buddha everywhere: schools, houses, on the side of the road...
-The King is really very liked here. There are across pictures of him, in homes, stores and huge posters in the streets. On 5 December, it's his birthday (it is also the day of the Festival of the fathers at the time!). Throughout the month, many people wear a yellow t-shirt in his honor.
-It is very hot, but bicyclists often wear long sleeves! Why? Don't want too dark-skinned, the dark Tan it is for people who work in the countryside!
-Many people travel on a scooter. We often see an entire family on a single scooter: the father, the mother and two children!
-Many cats have a very short tail. Has it been cut? Actually no, it would be due to genetics: This is the explanation (it's pretty funny to read until the last line!). The Temple of Wat Pho, has indeed seen a litter of kittens that were to be 2 or 3 days and some had a long tail and others an embryo's tail, without the slightest trace of scar!
-Bangkok was an opportunity for us to replace our gopro... The former recorded that when she wanted. We have made a gift of Christmas a little ahead to Siam Center! You'll see ptetre difference within 10 seconds per day.