Posted on March 9, 2015 by Estelle Dalmayrac

In Laos, the teachers speak very little English, and it is not easy to find information. We will still try to tell you what we know and what we have seen.

The school in Laos is public, free and compulsory (since 1996) until the end of primary school.

Schooling begins at the age of 6; primary school lasts 5 years, as in France. At the end of the 5th year, the pupils receive a primary education certificate.

There are some private schools, but it only concerns 3% of primary school students.

The uniform : it does not seem obligatory everywhere. We got the impression that it is especially in middle and high school that students should wear uniforms.

The students go to school 5 days per week, Monday to Friday, as in France. They go to class in the morning and afternoon: from 8 a.m. to 11:30 a.m. then from 1:30 p.m. to 4 p.m. Usually they go home to eat at noon, there is no no canteen. If they live too far away, they bring their own meals. Children come to school on foot or by bike (at college, they often have a scooter to come)

Repetition or school support is not set up for lack of resources. Teachers can award a small red scarf to good students.

Students also learn at school the concepts ofhygiene basic (washing hands, etc.). They are also responsible for tidying up the class and for sweeping in the morning or evening.

There is usually no sports lessons. But after school, children often take advantage of the playground to play: football, badminton, marbles ...

There are fewer vacations in Laos than in France:

The salary teachers' average is low (35 € per month for primary school). As in Cambodia, teachers often have a complementary activity, which has an unfavorable impact on the quality of education.
The Classrooms are often poorly equipped and of poor quality: a blackboard, benches or chairs, and wooden tables and that's it! A study (2012) indicates that half of Laotian schools have a leaky roof when it rains; only half have a water supply, 20% have electricity and less than half have a toilet. Conditions are harsher in the countryside than in the city.

Some examples in photo:

We have seen schools in villages. In cities, conditions are often a little better. Here, two different schools, one medium, and one very small (one classroom). 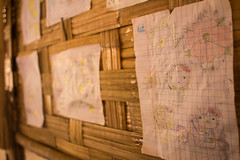 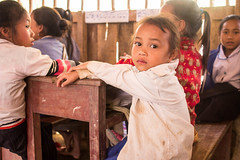 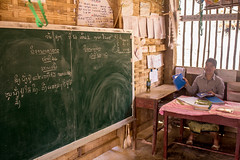 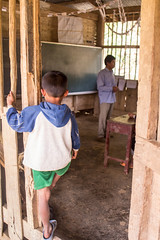 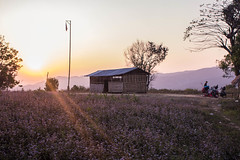 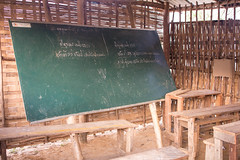 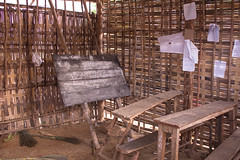