Impressive schoolchildren and the discipline to learn, despite the harsh environment.

The school we visited

It's a country school, in the mountains. In fact, in these regions, the school is often at the top of the village: if there is flooding, the school is a place that stays "dry".
There was three teachers for the 5 classes of primary. One for 6 year olds. We have seen them take turns going to the board to recite the Vietnamese alphabet, which is complicated to pronounce.
A teacher for classes 2 and 3; and another for classes 4 and 5. Each level has its own classroom: suddenly the teacher gave exercises to one class while she gave a lesson to the other class. Those who were in the classroom where the teacher wasn't there weren't doing too much silly things, but didn't seem to be working a lot!
But otherwise, we still got the impression that school in Vietnam is a little more serious than school in Laos or to Cambodia. 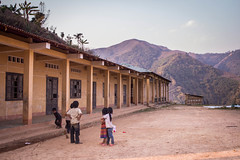 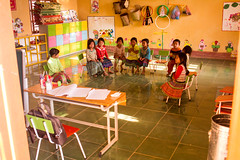 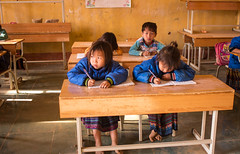 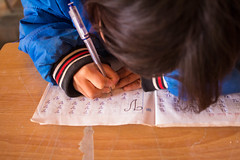 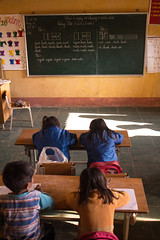 According to the 1967 Constitution: basic education is free and compulsory until the end of primary.

The classes : By law, there should not be more than 35 students per class in primary (but in reality, this is not always the case)

The uniform: In some places there would be a uniform: for boys, blue pants and a white shirt; and the girls a blue skirt and a white shirt. But we haven't seen him everywhere. On the other hand, the pupils were seen everywhere wearing a white and blue (or green) sports jacket, embroidered with the name of the school.

The school year : there are two semesters: the first starts in September and ends in February. The second begins after the end of Tet (the Vietnamese New Year's party) and ends at the end of June.

The teachers have 2 years of study after the baccalaureate to start teaching.

There is today three types of schools :
- Public schools funded by the state.
- The people's schools are non-profit establishments, the financing is ensured by the local authorities, by donations and by the tuition fees paid by the families.
- Private schools are funded by tuition fees.

Preschool
These are nurseries and nursery schools. Few children go there.

Lower secondary education
That is to say the equivalent of college. These are classes 6 to 9 for children aged 11 to 14.
Not all municipalities have a secondary school yet.
In some rural areas, where most people then work in factories or in the fields, as school is expensive (school fees, transport costs, etc.), some families choose to send children to work for earn money rather than go to college.

Upper secondary education
It’s the equivalent of high school. These are classes 10 to 12, for students aged 15 to 18.
At the end of the 12th year, we take the baccalaureate (“Trung ho.c phổ thông” in Vietnamese).

Boy / girl inequality.
Girls are less likely to go to school than boys. The female illiteracy rate in the country is 9.8% (the rate of people who cannot read, write and count).

← School in Laos
Glass half full or glass half empty? →