The land of lakes

Poland ! Spots of color draw the landscape, bathed in a warming sun. The yellow of the wheat fields, the green of the trees; the blue of so many lakes and the Baltic Sea; the white and black of cows (Norman?:-) ) and storks…

We had a rather gloomy image of Poland, but what we saw set the record straight. Despite a few abandoned houses, this decor of red brick farmhouses and thatched-roof houses leaves us with a fairly positive vision.

We entered Poland after a move to Lithuania quite fast ; border on 4 wheels (in the parental Dalmayrac motorhome) and not on two wheels this time!
By this same means of transport, we discover the Mazurie : region of northern Poland, known for its unspoiled nature and its many lakes. Indeed, there are lakes everywhere, and the lunch and sleep spots are easily accompanied by a swim. The first evening, we were surprised by the apparently very touristy side of the area… but we quickly understood when we realized that in the village there is the monastery where John Paul II slept in 1999, during his trip to Poland. You can visit the apartments where he slept… for two nights! First example full-scale of the piety of the Poles.

Then direction Elk where the motorhome makes a trip to the “doctor” which allows us to do… almost nothing! Reading, swimming in the lake… it's been a long time! 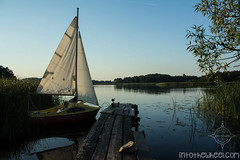 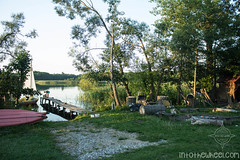 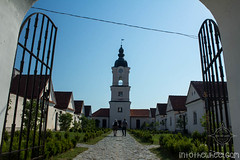 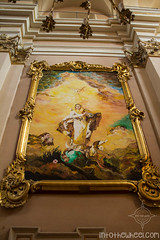 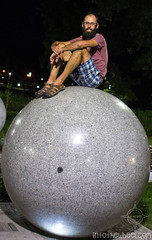 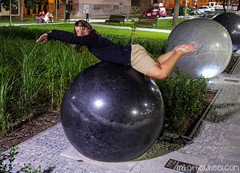 When our journey meets history…

We then drive towards the tourist lake of Gizicko… where we pass quite quickly.

If we pass by there, it is mainly to go to the wolf lair. It's here that Hitler spent a good part of the war: a village of bunkers, with not only those dedicated to the communication of the war, the lodging of the soldiers, but also cinema and sauna… This village under the trees was sought during the war, but never discovered. Crazy given its size and the 2500 people who lived there!
When the Russians arrived, the Germans dynamited the bunkers… but visiting its ruins is still quite impressive. For sure, this place is one of the highlights of Poland (and even of the trip).

The night is coming, we put tent and camper in the free campsite of the tourist area. Strange to sleep where Hitler lived... 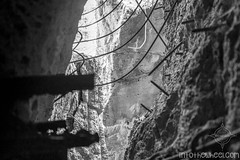 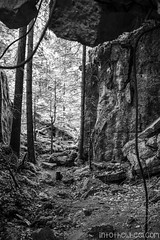 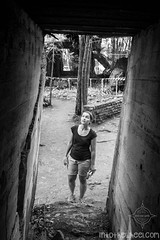 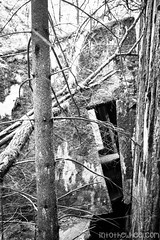 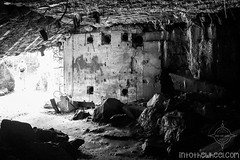 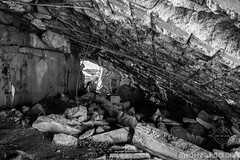 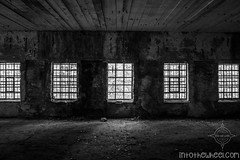 The team's morale was quickly boosted by the announcement of Emilie (Thomas' sister) arriving by surprise in Sopot, a seaside resort just next to Gdansk (Danzig). We swallow in one day 400 kms of road. Through the window of the motorhome, we observe the wheat fields in full harvest, the trucks, tractors and grain silots that punctuate the landscape. We swallow these landscapes faster than we are used to – and we are a little frustrated not to be there by bike.

But the advantage is that we are quickly in Sopot – the Polish Deauville – and we find there Émilie, Pascal and the little Inès of 18 months now (it's crazy what she has changed)!
For 48 hours we enjoy with family, and do tourism. The old town of Gdansk is very pretty, with pointed houses that remind us of Holland. But unfortunately, it is once again a Disney Land mass tourism with fashion boutiques Christmas market in almost all the streets… After this walkabout, we find a bit of calm and serenity (for those who are not too dizzy) at the top of the tower of the old town hall, where we can admire quietly the grandeur and splendor of the city. 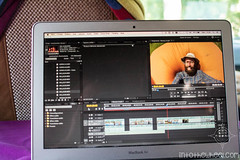 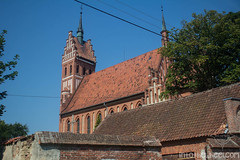 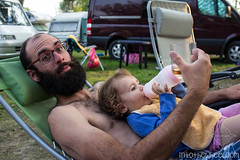 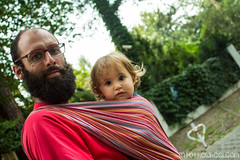 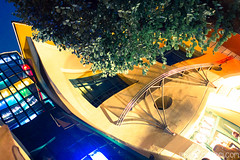 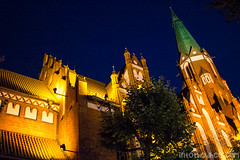 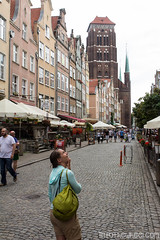 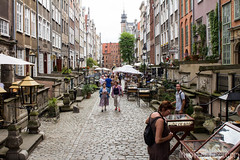 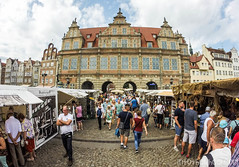 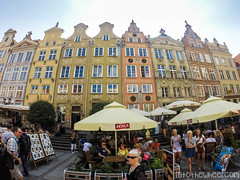 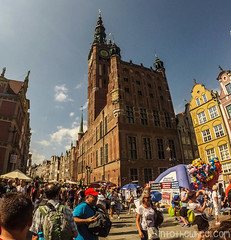 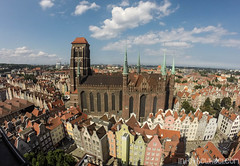 Aerial view of the cathedral 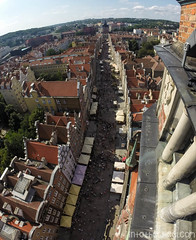 The return of the biclo

We then have to hit the road again on Monday; on a bike, yay!!

We say goodbye to the parents, whom we will see again in two months. Emilie and her family, we will still find them for the next two evenings to share bivouacs (they advancing by car).

The exit from Gdansk is good, with a lot of cycle paths. At a crossroads, a Polish grandpa comes discuss and ended up asking us to wait there for 5 minutes and came back with… a medal and the emblem of the city on a wooden plaque! After the city we find the countryside, varied and lively; great bike paths in the middle of nature; a natural park where you can see a lot of birds; but very random state roads – rather patched everywhere. After a beautiful day, we find a perfect spot in the forest – 1st wild camping for Inès!
The next morning, the R10 – the track that corresponds to the future Eurovélo 10 not yet realized here – we walk in the forest not far from the sea. No cars, only the dunes, the forest and… an impressive number of cyclists! After lunch on the beach, the afternoon is less fun, much more tiring: an imbroglio of cycle paths in the forest where you have to try to bet on which will be the least sandy... In short, you regularly push the bike, it's is dying!
At the end of the day we rinsed off, and Émilie told us that she had landed 20kms away… arf, we were exhausted, what were we to do? Go, zou, a last motivation shot and we decide to force a little to join them. After a few kilometers of road and still a lot of sandy tracks, we arrive at the campsite at 7:45 p.m.… relieved!

Between countryside and seaside resorts

The next day, our roads separate for good. A lot of paths and then the road, and we arrive at Ustka, where we have dinner on the beach facing the most beautiful sunset of the trip: on one side, a thousand warm colors of a sun that has just emerged from a day in the clouds ; on the other side a magnificent whole rainbow… The tent is set up in the forest at nightfall.
On the road, the countryside landscapes are always quite varied. The harvest is in full swing everywhere, and in the fields are now growing some strange things… wind turbines! It's hot, but the small roads are under the trees like our good old national roads in the south of France: it keeps you cool. It is gently hilly and very pleasant.

We continue in this way the following days between countryside and seaside resorts in spades. We are not very relieved by this mass tourism that we meet daily during our passages by the sea... But we keep beautiful images in mind of the countryside and the forests, as well as a very good impression of the Poles, although more smiling than the Russians and a priori rather nice. 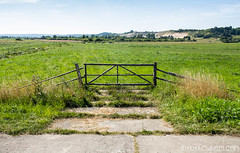 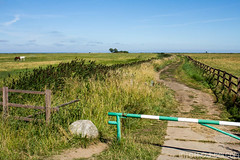 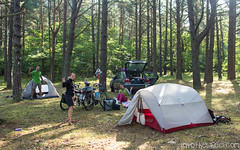 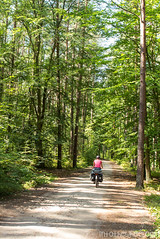 Poland, is it just goodbye?

Now off to Germany, off to Berlin! But there again there is a lot to tell… the rest in the next episode!