That's it, it's been a month that we are in China and 7 months of travel in any. Quick return on this last month...

We drove on Chinese roads only, and more specifically in the Yunnan and the Sichuan : Hekkou - Yuanyang - Jianshui - Kunming - Dali - Lijiang - Tiger leaping Gorge - Shangrila - Benzilan - Xiangcheng and bus to Kangding, Leshan.
In a large half of the month, we drove with another couple of cyclos french: patches released. What a pleasure to share this adventure with other riders who look like us!

In total, we are at 9037kms either 1347 kms by bike this month. Very correct since a good party was in the mountains!

Most of the time, the State of the roads is good: very correct bitumen and not too steep slopes. But sometimes, without warning, there are fifty horrible meters, the well stony track... Good, the only really rotten portion long, it has taken her... by bus!

We found the pleasure of eat varied way, the pleasure of discovering new ingredients. It is often bathed in fat (but it's okay!), it is spicy stack properly (a bit more spicy Sichuan). And everything is miles away from what we eat in Chinese restaurants here!

We were taken in picture dozens and dozens of times. Sometimes just us, sometimes with people. And sometimes even without our bikes!

We discovered an Asian country which has nothing to do with the 4 other visited before. And it feels good! One tired a little bit of South - East Asia, there was a need for change.

Our dear bikes have well bossé, maintenance continues.
Jianshui, we have changed our strings, after only 3000kms... And then to Kunming, Thomas realized that the problem was also his trays and sprockets wear: here is all new. Mine, should change them in the coming month. Thanks to Hui Li, Chinese warmshower and the store managerhis home and his help! It's nice to be able to explain the technical problems in a bike in China shop because most do not speak a word of English!
On the side of Thomas, his luggage is at the end of life, two welds dropped... Will have to deal with change.

From my side, change a room air that had a leak on the inflation valve (first change of room air at the end of 8600 kms). And breaking of the speed cable: inside the mechanism on the handlebars, he gave us some concern but could repair!

What we liked here:

Thomas has lost a Boxer (who knows where), and a t-shirt (in merino Decathlon, sniff...) probably forgot in a hotel...

At the edges of rivers, on the edge of a Lake, on a basketball court or in front of hangars... This is not too hard to find where to place the tent! As long as the site does not belong to an individual, people is in laugh a little.
In the cities, it had to go in hotels. Their concern: no heating in the rooms, just a blanket. Hard to get out of bed! 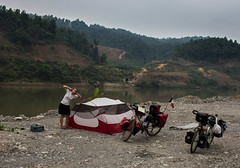 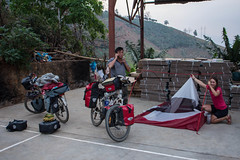 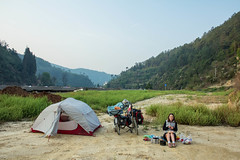 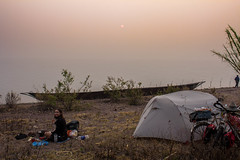 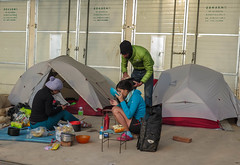 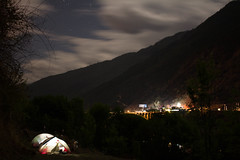 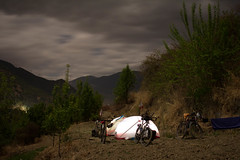 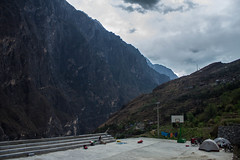 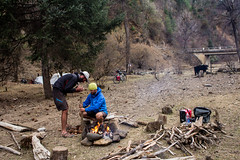 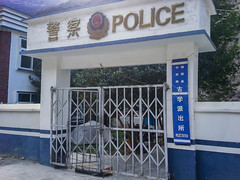 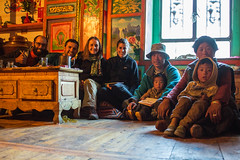 For we see or meet again in pictures:

Here we are in the season 3 of your favorite series: