Posted on November 3, 2014 by Estelle Dalmayrac

We left our host Marko Thursday, October 23, and Croatia within a few hours. After a stamp in our passports, we view the country little recently. They have no money (use the euro not part of the eurozone) and are only 650,000 inhabitants)see our country sheet).

In the day, we arrive at the Bay of Kotor. We discover this beautiful mountain landscape flowing into these small arm of the sea, a church on the water. It's really splendid! There are villages all along, you can see full of small kingfishers (it flies quickly its beasts ptites! No way to see more than a second or two, and even less to take phot0.
The evening we climb a small mountain and seek to lay the tent. It is looking in one direction, then in another... After several detours in vain, asked Council to a room that tells us just next door! The lady who lives there immediately accept without really understand another word than 'Camp' given what she repeats to Thomas. No more communication - it is his usual routine, but it allows us to spend the night in peace (except for the barking of his dogs). On the other hand, moisture that arrived (and surely also the 350 m altitude) makes really bright cold: we go out for the first time all of our gear cold: gloves, beanies, multilayer to meals; as soon as the last mouthful swallowed, it enters the tent quickly! The next day the Sun is there... but it is 7 degrees. Cold hands and feet, there are sensations of skiing! 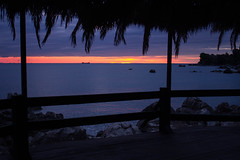 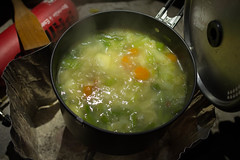 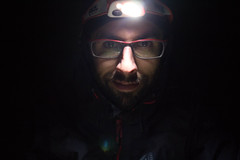 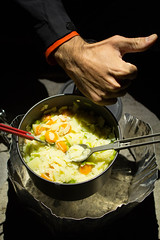 In the day, the sky is covered again; It is less cold, but the wind rises. We didn't ptetre sufficiently taken into account this element by placing the tent on a terrace of a bar closed on the beach. Suddenly, Thomas embarked on the construction of a protective wall; He took planks of wood stored in a corner of the Paracord (our 10 metres from Paracord are the best impulse purchase that I could do on the Internet, it is used for everything!), and hop, we are well protected! (even if the wind noise when even slightly prevented us from sleep...) 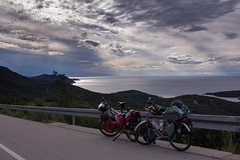 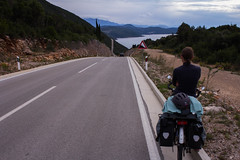 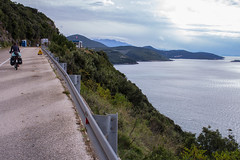 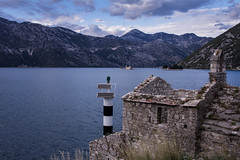 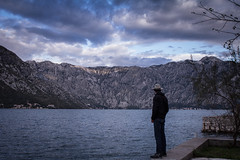 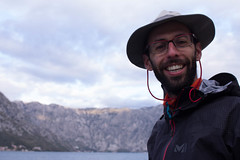 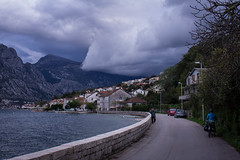 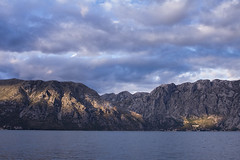 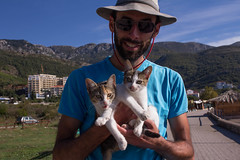 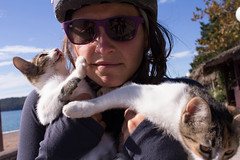 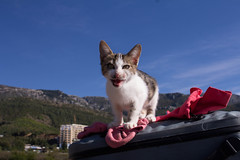 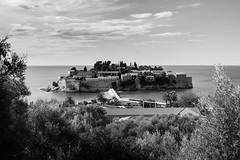 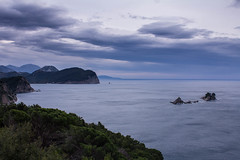 Le lendemain, on passe dans la ville de Bar : la ville a gardé toute son architecture communiste : on croirait avoir changé de pays, ou bien être dans le film “Goodbye Lénine” ! C’est un peu flippant ! 🙂
On the heights of the surrounding mountains (they are high, worry), we see the first snow. Winter is coming!
At the exit of the city, in a small side, it is stopped by a guy who lives in a caravan: it invites us to coffee. He speaks a little German so I rummage through my old memories to discuss. He saw not much, but we offer coffee (it is passed to the Turkish coffee now, it changes!), local pastries and wine. Montenegrin hospitality is famous we were told, and we view it right there! It is an admirer of Tito: another one! (our host Marko It was also).

When one goes towards the plain, we feel that we are reaching the border; mosques and Muslim cemeteries appear everywhere, and the faces have changed type. In fact, one has the impression of having left the country before even to have passed the border!
We really arrive in Albania fifteen kilometres later. And this country is full of discoveries for us! There's so much to say that it deserves a full post. Therefore to follow! 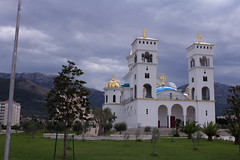 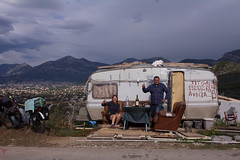 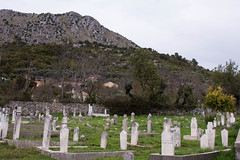 Some general information on the country

Good, otherwise, with Croatia, it also left the heat and the weather. The cold has arrived, and we spend our time we dress and undress us according to the altitude. We build up the layers of clothing when needed. The jacket Goretex is really useful for us, it keeps the heat and protects super wind well, while being well breathable during exertion. In short, we are happy to have a little invested in the right gear!

Montenegrins are really friendly. That well warmed us the heart in these first cold!

It has spent only 3 days, but it was kinda discovered this country still (or the minimum of its sides). It is very mountainous in any case, it did, well, warm thighs.

Everywhere we see hotels under construction (sometimes long?), tourism appears to be growing.

Montenegro, like Croatia, is the country's cats: there are everywhere, and a lot of kittens (on the other hand, cats and cars, it makes two. Many are reverse...)

In short, it has given us want to go back later... but with a bit more Sun!