Posted on January 24, 2015 by Estelle Dalmayrac

It is 2:30 pm - so it is very hot - we are in a rather remote corner of Cambodia (between Siem Reap and the border with Laos) where there is no electricity network or running water; we have for a while wanted to visit a school without knowing how to do it, and we pass at that moment in front of a small school.

We finally spend half an hour with them, then we resume our journey.

3 cows in the playground 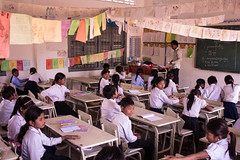 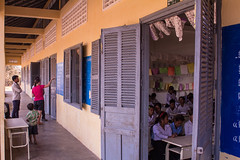 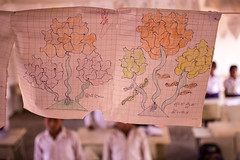 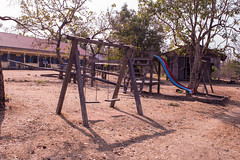 What the law says ?

The Cambodian school system is close to the French model, due to the long French presence in the country (1863-1953).

The Constitution of Cambodia announces equal access to education and the free primary and secondary education for all, and compulsory school up to the age of 14. Kindergarten is not compulsory, and few children attend (only 15%).

- In 2009, nearly 93% of children aged 6 to 11 were enrolled in primary school (against 81% in 2005). Most of the progress has been visible in rural areas and among girls. But difficulties persist: around 10% of children entering primary school are aged after 6 years and are therefore already behind; repetitions are frequent; 66% of children actually go to college.

- Cost to families : Public school is free ... in theory. There are still school fees (to help with the running costs of the school, to pay for the uniform, school supplies, etc.). And unfortunately, teachers often ask for extra money to supplement their income. It is illegal, this practice has been condemned by the government.

- There are also schools in the temples, run by the bonzes (the less Buddhist). This allows the poorest to go to school for free, in exchange for help in the monastery. We slept one night in a temple-school, where there were young monks, the youngest must be between 10 or 12 years old.

The time of learning

The rhythm of the day

Classes take place either in the morning or in the afternoon. It is often like that because there are not enough qualified teachers and / or places in schools. The other part of the day when they're not at school, they work often with their parents (in the fields, in their restaurant, in their little shop, etc.) and help with household chores.

To go to school, they either come to pied, either bike. In the countryside, they sometimes cycle 10 km to school.

The children go to school from Monday to Friday. In primary, each lesson lasts 40 minutes (27 to 30 sequences per week in all).

The school year includes 38 weeks of lessons, from the end of September to the beginning of July.

The summer holidays therefore last 3 months (from the beginning of July to the end of September)! But do not be jealous too quickly… From July to September, it is the monsoon period, so there is a lot of work in the fields for the crops: we leave them this long holiday period so that they can work. with their parents in the fields. This prevents most children, especially in the countryside, from dropping out of school during the monsoon.

Two other vacation periods in the year: in November for the Water Festival; and in April for the Khmer New Year.

Children often have little personal equipment: one or two pens, one or two notebooks, a ruler, an eraser. They store everything in a plastic bag. Sometimes they have a small satchel, but not all of them.

They have few textbooks. Sometimes there isn't enough for everyone and they have to share it with others (sometimes a manual for 5 students).

Wearing the uniform is mandatory. It consists of a white blouse and navy blue skirt for girls, a white shirt and blue pants for boys. It’s the same that we have seen across the country. Families have to buy it.

Schools do not have canteens. Usually they go home to eat. Sometimes there are small food vendors in front of schools so they can eat before they go home.

The subjects taught at primary school are: Khmer (the language of the country, our equivalent of French lessons), mathematics, national identity (history, geography), morals and civic responsibilities, daily knowledge to participate in the life of the local and national community , science, and a foreign language (usually English)

The tenured teachers have the status of officials. At the primary level, teachers must have the baccalaureate; but in practice, many do not currently have this level.

The salary is $ 60 (ie 53 euros) per month for primary school teachers; as a result, they often have to have a second job to feed their families.

It's not easy to find a school where people speak English well enough to ask all of our questions. So I found quite a bit of extra info on the internet.